What makes a great music video? What will you need to make your own awesome music video?Today the independent musician has more options than ever to be creative and make their own! 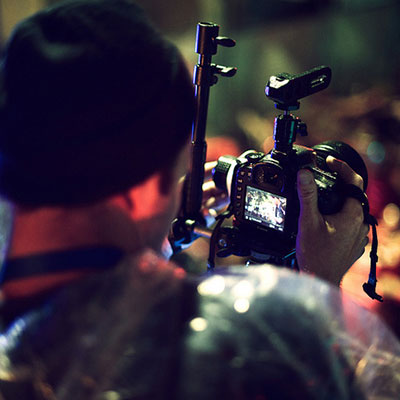 What makes a great music video? The answer is most certainly subjective but there are a few factors to take into consideration if you want your music video to stand out and remain relevant over time. The creation of a great music video begins with an original concept that is then executed with remarkable and brilliant simplicity. The visual should catch your attention immediately and build on a simple idea that will run its course at the length of the song.

There is no right way to make a music video these days and most all music videos will be viewed on the internet rather than TV. Music is the most popular category of video on YouTube and represents one third of all viewed videos. The average length of a video on YouTube is around 4 minutes and 12 seconds. The music video is the best way to promote your single these day and the more videos you have online the more potential there is for your music to gain attention. Remember to link all your social media websites to your music videos so that viewers know where to find more of your music.

With today's technology you have plenty of options with which to make your music video. It can be made with expensive technical equipment, special stunts, impossible footage made with CGI effects, famous actors and high production costs or you can make it with a smartphone, a computer animation program, or a VHS camera and your pet goldfish at very low production costs. Your music video is the visual representation of your song and you can use a vast array of elements and styles in its creation.

Whether your video is Hi-Fi or Lo-Fi it must remain consistent in its character and visual coherence. It could be a narrative, an abstract or experimental composition, a cartoon, the documentation of a live performance (for instance at a house show), a comedy, a romance, a ridiculous dance...  the options are endless but wherever your imagination takes you be sure that your video fits hand in hand with your song in its atmosphere and tempo. Often what makes a music video special and catchy is it's ability to interpret a song in a unique way that evokes emotion and inspiration.

What kind of equipment to use really depends on your concept and budget. The smaller the budget the more creative you will have to become because you won't be able to rely on the high quality picture of an expensive camera to capture the attention of your audience. A good example of low budget creativity can be found here for the song 'I've just seen a face' from the band April Maze who made a video using an 8mm app on their iPhone. Here is another music video from April Maze for the song 'I've Seen The Rain' in which it looks like they even used a drone. The first video using the 8mm app took a day to make by themselves but for the second video they hired a crew, paid production costs and it took more time to finish than just a day.

If you hire a crew for your video be sure to remember to be as generous, helpful, and clear in your communication as possible with them so as to make the work they do as best as you can get it. After all, they are the ones capturing the image of your music video, so you want them to feel stress free and focused (water, food and coffee/tea are a standard for any video shoot). Another option to look into as an alternative to hiring a film crew is to contact a local film school as student crews are often looking for projects to work on. You can always make a crowd funding or apply for funding to help pay the production costs for your music video as well.

If you don't want to use a smartphone but also don't want to hire a film crew and still want yo make a professional looking video on your own, you can use a reasonably priced camera with a Depth of Field Reducer. The shallow depth of field that 35mm and other professional cameras achieve is used to create an in focus subject and a blurred background. Many cheaper cameras are unable to realize this effect but with a Depth of Field Reducer you can achieve that professional look. Cameras with interchangeable lenses are the cheapest way to shoot really good quality video. The best beginner options are the Canon T5i/700D and the mirrorless EOS-M.

Another tool for DIY artist to use for shooting a music video is the 'Poor Man's Steady Cam' in which you can build your own stabilizer. Other equipment you may need in your kit are a Dolly, a Track, a Jib, and Film Lights which you can rent at your local film equipment rental agency. I've used construction lights as an alternative when working with experimental animations but I don't recommend using cheap lighting when shooting real life footage and renting professional film equipment is always a better option.

In the final stages (post-production) of your music video creation you will need a video editing program. Unlike digital music files, video files are substantially larger and use a lot of memory space on your computer. If you edit and render on your own you will need a high quality computer with a lot of CPU and memory that can handle it. The post-production process can take a long time, even after you are finished with editing and color correction it can take several hours to render. Always make a back up of your material on an external hard drive in case your computer crashes or somehow the file becomes corrupted.

A few examples I find represent the kind of brilliant simplicity that a music video can aspire to are:

Bruce Springsteen's- Streets of Philadelphia,  and Timber Timbre's- Black Water. For something else entirely masterful and clever the videos of the band Ok GO are not to be missed. No matter which direction you take when creating your music video remember it's not about making a commercial for your song, it's about  unifying the visual with the audio to create a memorable effect and experience for your fans.