Social media is a like a virtual garden of information that branches out in all directions between our keyboards, screens, smartphones and into our daily lives. It's available nearly everywhere and all the time and many people are constantly plugged into the social web. So as a musician how do you manage to create a thriving social presence? Here is some food for thought for the DIY musician on how to have a 'green thumb' while in the pursuit of growing and keeping attention on your music. 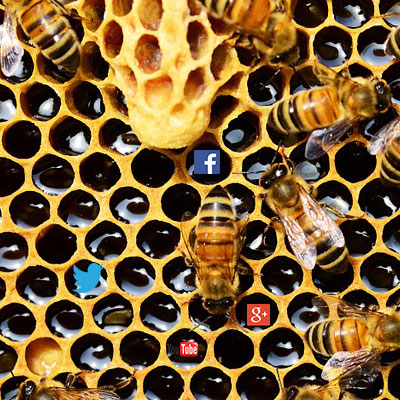 Relax and imagine that in essence your interaction on the social web is like an informational extension of yourself; your image, personality, or brand. Now imagine millions of these data stream extensions buzzing around like bees around a bee hive where everyone is making honey. The truth is that there are millions and millions of musicians on social media now in the 21st Century and one must be skeptical about how much actual energy is worthwhile to put into the social media train. Even if an artist does not instantly get millions of 'likes' or 'views' or 'followers' you can still develop and maintain a sustainable relationship with the fans you do have on the other end of the wire and keep those fans interested in what you do.

Quality rather than quantity

Weekly and daily routine tasks might help some artists to get their social media buzz going but remember the public attention span is pretty short, changing by the day, even by the hour. Realize that your music, photos, videos etc. are more than likely being browsed over pretty quickly by most fans in the social network simply because there is so much information available. Having a green thumb with social media is similar to growing a real garden; it isn't so much about the quantity of seeds you plant, it is more about quality, timing, and taking care of those seeds. That’s why previous iMusician blogs already explained that social media best practice include more “dont's” than “dos”.

Be minimal and meaningful with each post. No one can possibly keep up with every trend, or every new craze or fad, there are just too many. Consider the possibility that meaningful content has always lasted longer in history than shallow content. Interaction on social media is productive when your new posts are authentic in their purposefulness and if they can stick to your fans memory.

For instance, the Swiss artist Sophie Hunger is very active on social media, it seems she is posting something new online all the time. Last year she asked her fans to vote between two different electric guitars in order to help her decide which one to buy. She posted pictures of them online and wrote a bit about the characteristics of each guitar and asked what her fans thought of them. It was a clever way to boosts her fans interest online and to give them the feeling they are more deeply involved with the project and the creation of her music. Before you start posting daily, make sure your profile looks good, your music or video links are up-to-date and your band page (wherever it is) can be easily found by your audience.

You don't have to be active on the social net all the time though. Many 'musicians tips' articles today try to explain step by step ways to improve and revolutionize your social media presence. These articles often read somewhat like lose weight fast regiments, or get amazing muscles in thirty days routines and it seems to take the fun out of it all. If it becomes a tedious job to keep up with your social media, more than likely it will reflect on your posts and also you might even get burned out.

Many bands and artists are not feverishly active on their social sites. Instead they keep their fans in suspense by posting in doses. Take for instance the band Modest Mouse, they have barely been active on social media for years now and for them it seems that the occasional post rather than a constant presence is working just fine. The anticipation for the new album 'Strangers to Ourselves' is boiling over and fans, blogs and magazines seem pretty excited to experience each new track or video, one at a time, one week at a time, leading up to the record's release. The band's popularity is consistently building momentum because they are watering their part of the garden with tact, patience and tenacity.

Another independent American artist, William Elliott Whitmore, only posts a short sentence or two about his life and musical endeavours about once or twice every other month, even just seasonally it seems. Each post he shares is as poetic and stark in it's content as his music is and this is a perfect example of giving fans what they crave (as his posts are consistent with his rural artistic image) while periodically managing his social garden with a green thumb. Whitmore stays true to his art while delegating the tasks required to make his project successful.

Don't be a Tool

Remember that social media is a tool. Tools don't do the work to get a job done, rather it is the person using the tools. No one can really tell you exactly how to succeed in the social media garden. One can always purchase 'likes' on facebook for instance but I recommend NOT to do that because it’s a scam a lot of musicians get tricked by. It’s important to not over-focus on Facebook. It might be the most popular social media, but it only allows artist profiles to reach 5% of their likes for free (in order to boost their advertising revenues).

An inspiring story about this topic is how Fearless Vampire Killers created their own social media to answer Facebook cutting their organic reach. It seems that those who truly prosper seem to just naturally care about what they have planted and they keep in mind how it will benefit their community. The sweeter the honey the more bees will be buzzing.