Have you heard of The X Factor? How about The Voice? Pop Idol, Popstars the Rivals and Britain’s Got Talent? Chances are, you have. The proliferation of televised talent shows has boomed over the past decade. Audition for any of the above and you can make the big time, we’re sold. The whole nation will be bowing at your feet, throwing flowers in your path, and underpants onstage, while you finally get to realise your dream of being a full-time musician. Tour buses, riders, award ceremonies, dancers, backing singers and platinum records will soon be in your grasp. You’ll be bathing in money, trashing hotel rooms and travelling the world.

An average day will consist of lounging around, then studio time with Jimmy Napes, before hitting the town to embark on whatever hilarious adventures that evening will most definitely bring. Sounds easy, right? Well, not really. In reality, auditioning for one of the aforementioned shows won’t necessarily transform you from a struggling musician into a superstar overnight. Want to know the truth about TV talent shows? Read on for some expert advice from those in the know. 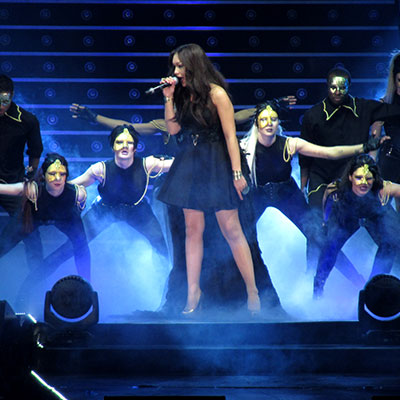 Labrinth is a singer/songwriter from London who got his first break creating “commercially cool urban music” after penning No.1 and No.2 hits with Tinie Tempah, Pass Out and Frisky in 2009/2010. While he’s never auditioned for a talent show himself, he’s signed to Sony label Syco, which has a host of ex-X Factor contestants on its roster, including Ella Henderson, Little Mix and One Direction. If you want to “be a superstar” the route to market could be for you, he says. However, if your plan is longevity, the initial legwork – gigging, learning your craft and building a fanbase – must be done first. He explains:

“Sometimes people come on the show with a naive mentality and not knowing that they have to do work. It doesn’t happen overnight. You have to do the shit shows, you’ve got to be nervous before you go on stage and perform in front of two people in a bar before you do a stadium and you walk out there with your chest up and say, Yes, my name is worthy of you people.

“To me, Syco and the X Factor is just a platform to get yourself to another level, just like YouTube is a platform. When it happens fast off YouTube these people don’t always know how to deal professionally with this business. It’s just a trampoline to another level, you’ve got to do your work, learn all the stuff you can learn because true professionals know how to maintain their position. People who don’t know their shit disappear in seconds.”

Ella Henderson: ‘Be sure of who you are’

Ella Henderson is one of the rare artists that was given a real chance to develop after appearing on the X Factor in 2012. Despite finishing in sixth place, she had a host of record label offers on the table. Henderson signed with Syco and was then allowed two years out of the spotlight before releasing her debut album in October 2014. There are lots of other acts that graduate from the show and have their music rush-released while their names are still remembered, before fading into obscurity. Why was Henderson different?

“When I came off the show and was being pitched to by record labels, I sat down and said, The one thing I want to do is take my time. There has to be no time frame, no pressure. I want to grow with my music. I was 16 so I wanted to understand the industry more and be able to steer the direction of the big decisions I have to make. I don’t want people making these decisions for me. You hear so many stories of people feeling trapped and feeling like they don’t have the right to make any decisions but with my whole campaign - whether it comes down to the music, how I look, or how my video looks - it has to come from me.

“In the music industry a lot of us can feel like we’re not in control of ourselves and musically I had to figure out what kind of artist I want to be, what kind of music and sounds I want to make and what I’ve got to tell the world that hasn’t already been said. I write from life experience. In my head I was like, This album is going to be my diary to the world and I want to say things in a way they’ve never been said before.”

Will Young: ‘The end goal isn’t to buy a house in the Bahamas’

When Pop Idol was first launched in the UK in 2001, Will Young battled it out with teen heartthrob Gareth Gates and claimed the winning place. Since then, the singer has released five albums and is just about to issue the sixth after signing a new label deal with Island Records. He’s long past being considered a novelty act because of his very public development stage. Young has managed longevity by remembering why he wanted to make music in the first place.

“The end goal isn’t to buy a house in the Bahamas, if I get picked up for the next album, then I'm happy. It’s the right mind-set for me, [I don’t] think this [album] has to be No.1, I have to buy a Ferrari, I have to get more and more and more. I have enough, and I’m very content with that as long as I can carry on doing music, and everything that's involved in it. I never did [Pop Idol] for fame, I just wanted to be a singer and a songwriter.”

There’s no denying TV talent shows can be excellent platforms for exposure and kick-starting a music career, but if you’re not sure of who you are or why you’re making music, it can be a dangerous path that leads to landing on the scrap heap of failed musicians. If you decide to join the long queue of auditionees, be solid about what you want to be, don’t change, and don’t do it for the wrong reasons.