Many of our posts focus on how to get your career off the ground, utilising technology, optimising your Youtube presence or avoiding mistakes on Soundcloud. This time around, we’ll show you what to keep in mind when all of that hard work pays off; when the grand moment of signing a record label contract arrives. 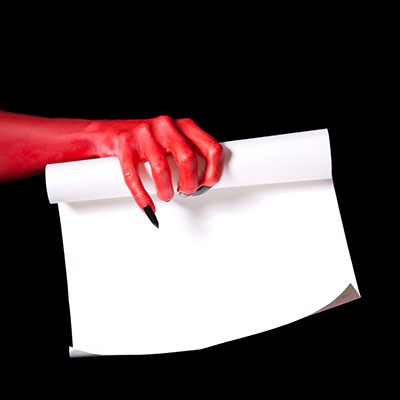 are basically the same as they were 20 years ago, not much has changed”, said lawyer Wim Schreurs at this year’s Midem. Schreurs works at law firm Ubilex that specialises in technology and entertainment. “They are still about duration, options, territories and clauses about the advancement of royalties,” he explained. So what should musicians pay attention to?

The exploitation period is the period during which a label can exploit recordings that are made under the agreement. With traditional releases, like physical copies or downloads, the sales curve goes up really quickly immediately after the release and then goes down again. In those cases there’s no need to grant your label a long exploitation period. This especially applies to the electronic music industry, where releases are generally based on singles rather than full albums.

That changes with the rise of streaming. On streaming services people put their tracks into playlists. “Playlists become very important because once a track is in a playlist it gets played increasingly more. So it’s more useful to grant your label a longer exploitation period”, said Schreurs.

What’s more, many record labels today get a passive share of the artist’s live income, and a share of merch, sponsoring and advertising money could be included too. The shares resulting out of these rights have to be paid to the label during the contract period. Schreurs prefers to negotiate shorter contract periods for up and coming artists, so labels don’t end up taking a large share of an act’s income for years to come as it gets bigger and bigger, when new terms should be agreed.

Options designate the right of labels that release a record to release the subsequent record or records. According to Schreurs, the same contractual conditions apply to the optional recordings. So if you grant options to a label, you also collect advances for these options.

A point that is especially interesting for artists who release on a single basis: it’s not only about how many options you grant your record label, but also about the moment when the record label has to take the option; for instance, within a certain period after the release of the previous record. The earlier you know whether your label is going to take the option, the earlier you know if you’re entitled to an additional advance.

Speaking of advances, generally speaking, they’ve become much lower. One reason being that smaller labels especially don’t have the cash. Another reason is that production costs have dropped massively, especially in electronic music. And it has become much more difficult for the label to predict the revenue it’s going to make, which was quite easy with physical copies.

In the olden days an advance of €10,000 and a royalty of 20% meant that, to break even, there had to be a turnover of €50,000 (because an artist has to recoup the advance). In order to get a turnover of €50,000 the label only had to sell 5000 copies at a price of €10. That put artists in a very interesting negotiation position, because they could ask the label, “Do you really only want to sell 5,000 copies?” The label would go, “No, we’re aiming for 20,000.” The artist could then see that the label’s ambition wasn’t reflected in the advance, and ask for a higher cheque.

In the physical age, it was a big risk for record labels to release in a foreign territory. You had to import physical copies of the record into that country and pay mechanical rights to the artist’s collecting society upfront. Secondly, because of packaging and shipping, each copy was an additional investment. You also had to invest in local marketing and promotion campaigns to get into the local press and radio.

“In the case of downloads and streaming, the owner of the master rights doesn’t have to pay mechanicals upfront. In fact, he doesn’t have to pay mechanical rights anymore at all,” said Schreurs. “It’s the platform, the shop itself, that has to pay the mechanical rights to the publisher or collecting society. There’s no packaging nor shipping, and marketing and promotion campaigns are getting more international.”

Artists should make sure these developments are reflected in their contract and keep in mind that a label should do much more than simply place the music in stores worldwide and see where it goes from there. You’re perfectly capable of doing that yourself by using aggregators like iMusician.

Since the leak of the Sony Spotify contract it has become clear that the reason for artists receiving the short straw in the streaming age has a lot to do with the label being greedy. Schreurs demonstrates how a DIY (decide it yourself) artist is far better off than an artist represented by a label when it comes to streaming, estimating that one user on Spotify generates €0.01 per stream for the artist on average. Since almost no intermediaries take a cut, one million streams on Spotify will generate €5,670 for that artist. Due to the large cut a major label usually takes, that sum is decimated to €1,890 for an artist signed to Universal, Sony and Warner. It’s even less for artists at many independent labels, that not only take their cut, but also work with a distributor who needs to be paid as well. 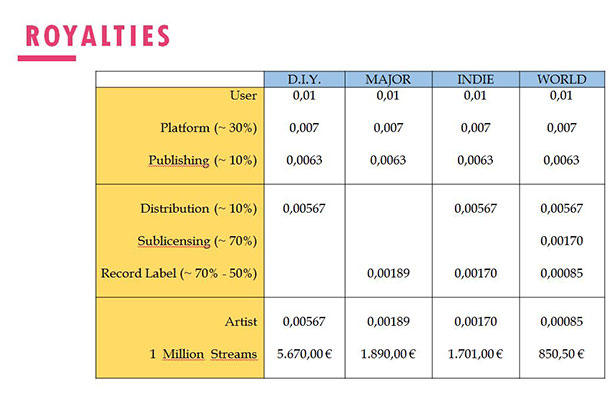 look really bad when we’re talking worldwide deals, because sub-licensing to even more contractors all over the globe will cannibalise earnings even further. Column D explains the situation where the artist has signed with an independent or major label that has sublicensed the record to other local labels in local territories. This happens a lot. The sub-licensee often takes 70%, so only 30% are forwarded to the artist’s label, and the artist receives only 50% of that net income. Says Schreurs: “The whole point of my story is that the calculation basis of the royalty is extremely important when you sign a deal as an artist, especially for exploitation in other territories. Is it based on net income or on the pay-out by the platform. My experience is that it is possible to negotiate that the artist’s royalty for streaming and downloads have to be calculated ‘at source’ instead of being based on what finally ends up at the artist’s label.“

Artists need to know these things when signing contracts, so they can point out all the clauses that aren’t relevant in the digital age. Labels may be still important, even if it’s just for the prestige factor. But some of them, especially the majors, still like to get disproportionately rich on behalf of artists. Don’t get screwed!

What is an EP, single, or album release?